Oh, I was planning to write this article tomorrow morning, but since it is june 1 in Germany, people there already started to put everything on the web, so I will do my point of view here and now.

In May some game journalists around the world were invited to go to Japan. This guys received the incredible opportunity to visit one of the biggest game companies ever, Konami. I was one of this guys, a brazilian game journalist invited to see the newest installment in the soccer games franchise.  It can even sound cliche, but have the opportunity to look inside the production of Pro Evolution Soccer was just  amazing. About this trip and all the details of it, you will see in a series of videos that I will publish in my youtube channel. There, you will be able to see a little piece of what we had witnessed.

So, I want to talk about the game itself…

We were invited to see and try for the first time this new features that PES production already released to the public. Seabass said the theme words they used in the production of PES 2011 was Freedom and Change. With this 2 words, the developers start to think how to make PES more realistic and did all the changes necessary trying to reach this objective. The first thing we noticed when start to play the game was “Dude, this is hard”!

This is because they add some different AI routines and put us to test them. The players become smarter than ever! There are 3 new routines of AI in this game used to defense in the most part of the time. They are:

– Pressure against the enemy player with the ball; (in this, your player will push the enemy trying to get the ball back);

#if you put the pressure level on maximum, four players will push the opponent at the same time.

– Mark the opponent to hold him in the field (in this case you just stay aside of the opponent waiting for him to make a mistake);

PES fans actually can choose what routine is the best for each kind of strategy and this will be activated depending of the distance of your goal the offensive is in the field. Seabass said to us that the maximum pressure looks to be the weakest one, because if you show to your opponent you want to pressure him, He will just pass the ball always avoiding this attacks.

When we were playing, we knew the AI was “studying” us… It is insane but when the computer score one point, they already know how to score the others. To survive, you need to change the strategy and movements.

By the way the movements are more fluid. In the past the dribles and runnings was made just in 16 directions, but this time you can do in almost every direction. They made this to make passes easier for the player.

Probably one of the most significant differences that every Pes fan will notice is the Power Gauge on the feet of each one of your players. This bar will appear everytime you need to do a short pass and a long pass. The pressure of the button will charge this bar and using the D-pad you must aim for the next near player from your team. If you press too weak, too strong or no aim right, you will probably lose the ball. It is free like the real game.

You can master this new command or keep losing the ball for ever and suck! This is probably the aspect of the game that someone will love or hate. One thing that bothers me everytime was… When I pass the ball pressing too much the button, the bar fill up very fast, but when the ball arrives in the feet of the other of my players the rest of the bar that I didnt used in the first player is automaticaly transfered to this new player. In the begining I didnt know how to control this so, eventually the new player who receives the ball pass to anyone near him. So I just lost the ball many times. You need to be “re-tuned” to play pes 2011, so I think even the pro players will need to re-learn how to play this one.

Seabass said they need to do a final balance on the game, so I hope this “Transfer of the power bar” not remains in the final version. I am praying for it.

Speaking about dribles and feints, “they are more effective and not just to show” (Seabass and John Murphy keep saying that!). They recorded more than 2000 movements in the Motion Capture Studio and choose 1000 to implement in the game. Now the player can actually program the movements he likes to use (see the picture of the control chart). This feints and Dribles are much more effective, if they are used in the right moment.

Jostling movements became more realistic because de physics are more implemented so the power of each player makes difference.

Ok, from this you already know that Messi will stay in the cover of PES 2011. But not just that, he will continue to be a Speed Star, who is one player faster than the others. Messi can actually do a over speed running through the field. Sure, if he runs too much will be tired, but he still a Speed Star like many others players. So according to Seabass the best way to defeat this Speed Stars is be aware of his presence and use the 3 routines of defense to block his runnings.

Talking about Speed, now you can really choose what pace you want for your game: fast, medium or slow. You can choose by number between -2 to +2.

Seabass dont spoke much about the Master League Online, but he said the game will have much other aspect that will remain a secret until the time is right. One of this kind secrets was revealed by Mr. Tsunashima who was programming the new tactics mode. According to Tsunashima, in this option you can do much more customization than in the older versions. You can actually change the position and drag everything to construct your own strategy. To complete the explanation, Tsunashima said he was putting something in this mode to make the strategy changes automatically when the team is losing the game. So, when you are losing, the strategy will change to make your team more offensive or defensive.

The graphic is just amazing. They apply a new camera angle who copies the same position of the cameras in live soccer game tv transmissions. The name of this angle is broadcast. On the replay mode, the programmers apply in the images a thing called motion blur to simulated the same conditions of movement when you are watching the game from your home.

About the visual of the game, they remade almost everything. They remodel all the players using actual photos and videos to copy digitally everything to perfection. If you look on the screen of the computer on this picture of Endo (lead graphic programming of PES), you will actually see the model they made based in one of the Ivory Team Players. The first image from left is from PES 2010, in the middle is the picture of Ivory player and in the last image on the right is the PES 2011 model. 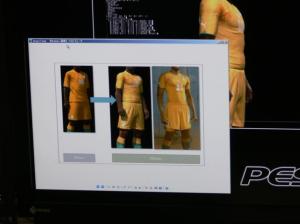 This new remodeled players have more and new facial expressions and eye movements. The expressions of the players will change with the situation. If they are tired, losing the game, angry, etc. His eye movements follow the position of the ball in the field and the spine court help all the body to make the movement even more human. The result is a much better movement visually speaking.

They dont said too much about new fields. It seems that we will not have stadiums from each place, So, I dont really know if we have latin american stadiums.

Ok, That was my impressions of PES 2011, if you have any doubt just ask me on twitter! www.twitter.com/penpas .

I will put more and more videos from PES Tour, so I hope you enjoy it.